Written by  Fotis
Published in Blog
Tagged under
17 comments 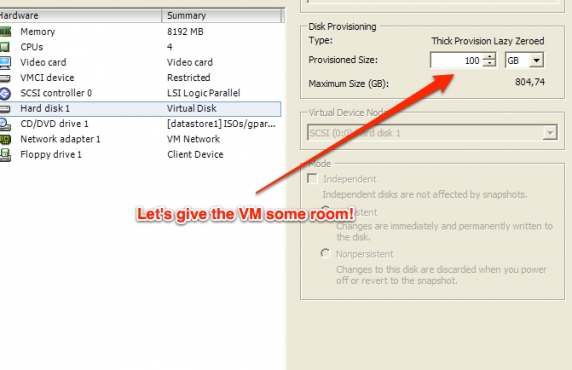 We generally do both dedicated and VPS hosting for our websites, apps and some premium projects we run for others.

When we choose to have VPS servers (aka virtual machines or VMs for short) instead of dedicated servers, we usually opt for VMware's free ESXi 5 and install Ubuntu Server as the OS for the VPSs we create on top of ESXi 5. It may not be as friendly as some VPS providers like Amazon, Rackspace etc. but you got more control and it's on YOUR hardware (pretty important actually!)...

Now, when you build a VPS on VMware, you start with say 40GBs of hard disk space. You install the OS, setup the server, move the sites on this new server and you're on. But what happens when there's no more room on the server for your site or sites and you need to add more disk space?

The process is quite simple:

a) Connect to the VMware ESXi 5 server using the vShpere Client. Edit the VM's properties to increase the hard disk size (VM has to be off) - I won't get into details on that, if you have the experience on managing ESXi you know what to do... I'm assuming the process is the same for ESXi 4. Now restart the VM.

b) Login via SSH to the VM and follow this process.
- First list all partitions:
$ ls -al /dev/sda*

- Now let's extend the server's Volume Group to that physical volume.
$ vgdisplay
This will give you the info on your current Volume Group. Note down the entry next to "VG Name". That's your Volume Group name.
$ vgextend EnterVolumeGroupNameHere /dev/sda3

- Since we're (essentially) extending the main logical volume, let's get the name of that:
$ lvdisplay
and note down the entry next to "LV Name". This is your logical volume's name (e.g. /dev/srv/root), which you'll now extend to the newly added partition/physical volume.

- Finally, let's resize the file system to the new allocated space:
$ resize2fs yourLogicalVolumeName
(this may take some time depending on number of GBs added to the file system.