Written by  JoomlaWorks
Published in Blog
Tagged under
Be the first to comment!

New milestone for K2 translations & an important message to the translation teams! 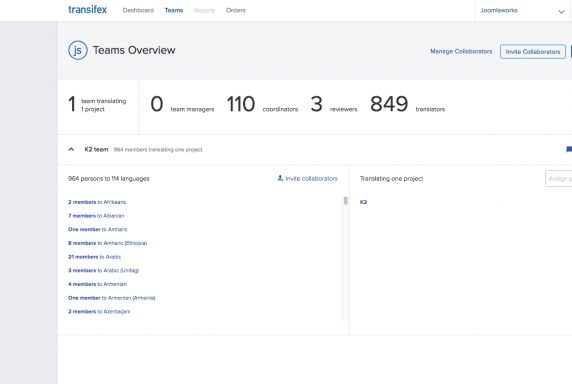 Wow! K2 translations have reached a new milestone! There are now 89 active language teams (out of 114 in total) with 849 active translators (out of 964 registered). As we are nearing the launch of K2 v2.10, translation teams have also started wrapping up incoming changes to the K2 language files and we are seeing increased activity across the board. So a big thank you to all K2 translators for their hard work!

This is obviously an incredible milestone for K2 (as it's probably the most translated Joomla project - heck, it even has more language teams than Joomla's 75!), especially now that the project is nearing 10 years of life!

A message to the K2 translators

We recently had reports from K2 users in the forum that some language packs failed to work as expected. Initially we thought it was a zip packaging issue between Transifex and getk2.org but since any such issues were known to be corrected on Transifex's side (availability issues primarily), eventually we found what the actual problem was, which also explained why some language strings would appear translated while others didn't.

The problem is that some language packs, especially the oldest ones and as such the most popular ones, continued to use the "_QQ_" identifier as a way to insert double quotes in translated strings. This identifier was introduced way back in Joomla 1.6 as a weird way of having double quotes within translated strings (don't ask...), however it was removed with the release of Joomla 3.9 and as such causes language files that still reference this identifier to not load at all.

So I kindly ask all K2 translators that they review their translations for this identifier and replace any "_QQ_" and \\"_QQ_" instances with either a single quote (') or an escaped double quote (\"). The single quote option is obviously the easiest and cleanest to be honest.

A related announcement has already been sent through Transifex to all contributors as well.

The K2 team is preparing for version 2.10 to be launched within February and there are already some minor fixes/cleanups and improvements compared to v2.9.0. The plan is to go from v2.10 to v2.11 (tops) and then switch to v3.0 with a revamped codebase that is based on the Joomla v3.x (and the upcoming v4) API, with any legacy code entirely removed and -most importantly- the language files consolidated to just 2 files: one for the frontend and one for the backend. This will also make managing the translations a lot easier on the long term.

If you have any feedback or comments, feel free to reply back or (even better) post to the K2 forum at: https://www.joomlaworks.net/forum/k2

If you wish to join one of the language teams, have a look here please: https://www.transifex.com/joomlaworks/k2/

For users that wish to download a translation pack for K2, please visit the K2 Translations page here: https://getk2.org/extend/translations